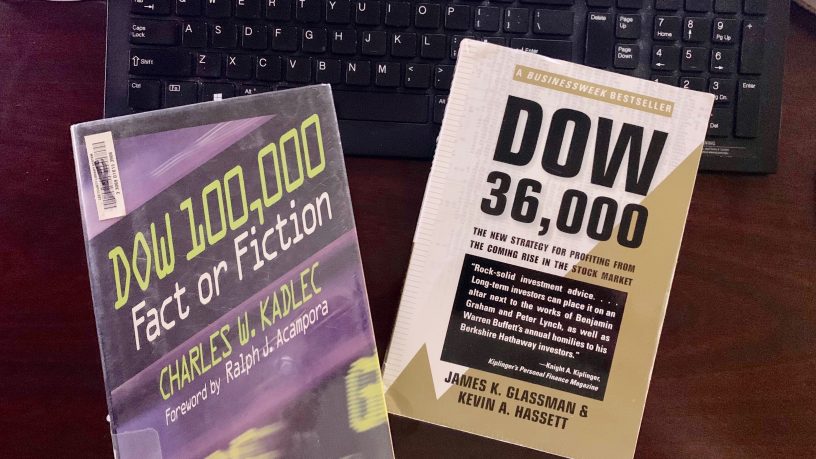 Depending on the measure used, the U.S. stock market either flirted with or set a new high last week. The broad market S&P 500 reached a new peak, while the 30-stock Dow Jones Industrial Average verged on a record. What are the future investment implications, if any, of setting a new high?

By itself, simply knowing that the stock market is at an all-time high gives you no information that is useful in making a decision. Knowing that the DJIA is at 27000 tells us nothing about where the DJIA ought to be or what the stocks in the index are worth. Nor does it help answer many investors’ most pressing question: where is the market headed?

Investors who ascribe to the “trend continues” school of thought assume that higher stock prices are precursors to even higher prices in the near future. On the other side, the “trend reverses” believers tell themselves that what goes up must come down.

In the near term, there is zero evidence that either school of thought is useful in predicting future stock prices, although there is overwhelmingly strong evidence to support the “trend continues” thinking over very long periods – not the next year or even several years.

In my office is a copy of the 1964 book, “Dow 10000,” by Benton Davis. At the time of the book’s publication, the DJIA stood at 7000, after increasing 43 percent in the prior two years. To reach 10000, the index would only need to increase another 43 percent – which it did … 32 years later. By contrast, in the 32 years prior to 1964, the DJIA increased 735 percent. One can hardly blame a “trend continues” proponent/author for his bullish prediction, even if his core assumption holds no short-term validity.

I have some other interesting books lying around. Kiplinger personal finance columnist James Glassman wrote “Dow 36,000” in 1999, at the peak of the Internet bubble. Although Glassman predicted we would reach 36000 by 2005 (the DJIA peaked around 14000 that year), twenty years later we are still waiting. Following the 2007 – 2009 Great Recession and a 55 percent DJIA drop, Glassman held to his “trend continues” mindset, penning “Safety Net: The Strategy for De-Risking Your Investments in a Time of Turbulence”. In the 2011 book, Glassman acknowledged that “Dow 36000” was incorrectly optimistic and that investors should move away from equities.

Since the book’s publication, the stock market has exactly doubled.