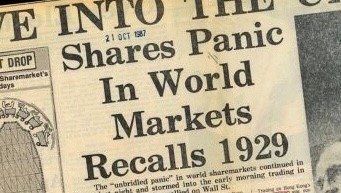 In 1987, I had been working in the investment business less than two years when the Dow Jones Industrial Average collapsed almost 23 percent in a single day. My wife and I had just closed on what we thought was our forever dream home: a newly built, three-bedroom house with vinyl siding in a brand-new Gordon Enger neighborhood off Cedar Bluff. Our purchase price was $76,000, most of which we financed at 9.29 percent.

Current mortgage rates and a 20 percent decline in the U.S. stock market have me a bit nostalgic lately. So does almost nine percent inflation, although by the fall of 1987 inflation was less than five percent, down from a peak of 14.6 percent in 1980.

When the stock market collapsed in October 1987, I spent the late afternoon in a roomful of elderly stockbrokers – some of whom had to be at least in their mid-to-late 50s. I benefitted from the general oblivion of having grown up in a socially stunted area of rural Alabama, else I would have almost certainly been frightened by the reactions of these older, and presumably wiser professionals. These men were commiserating over the end of the investment industry. I was a brand-new investment industry guy who owed Curtis Mortgage Company almost $70,000.

For perhaps the first time in my life, being (relatively) poor was an advantage; my personal investment losses that day probably only totaled in the hundreds of dollars.

I didn’t panic at the decline – not so much out of ignorance as much as it was from idealism. I could quickly point to all sorts of historical charts that “proved” that the investment industry wasn’t about to end, and that operating companies with profits would prevent the Dow Jones Industrial Average from going to zero.

The stock market had always recovered from declines, even substantial ones. And the recoveries always seemed to be generally related to the long-term health of the economy, particularly the businesses that comprised members of popular stock indexes. Fortunately, I was not yet familiar with the concept of a “black swan event.” That is, some events are like black swans: just because you have never seen one doesn’t mean that they don’t exist. I just kept putting my $190 a month in my 401(k).

No one in that smoke filled conference room on Black Monday would have dared suggested that 1987 was a good time for a young person to begin his adult life, much less to attempt a career in investing. But it was actually the best time in the history of mankind to transition into adulthood.

Thirty-five years from now, I suspect we will say the same about 2022.