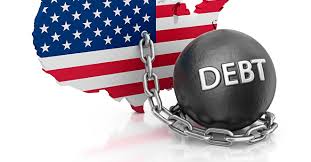 The US Treasury reports the US federal government debt at $19.2 trillion, a figure that both overstates and understates its true obligations by trillions of dollars.

In absolute, an entity’s debt level is irrelevant. A money manager could reasonably carry more debt than someone making sandwiches at Jersey Mikes. Likewise, the debt capacity of the US must be considered in context of our current and expected national income, or Gross Domestic Product (GDP.)

In 2015, US GDP, totaled $18.2 trillion. Of our $19.2 trillion in stated federal debt, however, $5.3 trillion is intragovernmental debt that, if the federal government used the same Generally Accepted Accounting Principles (GAAP) required of public companies, would be netted against the $19.2 trillion for reporting net debt at the “holding company” level.

The net public-held US debt of $13.9 trillion is only 76 percent of our GDP, a manageable and not-rare level for our economy.

Using GAAP, however, would require the US to report as liabilities the present value of all future obligations, not just its Treasury notes and bonds.

The future payments to Social Security beneficiaries isn’t included in that $13.9 trillion, although it is a real debt. Politically, Social Security is likely as sacred as any bond the government has outstanding. But even this amount of this liability isn’t as disastrously onerous as is often warned.

The present value of future unfunded Social Security benefits is $10.7 trillion. Combined with the $13.9 trillion in explicit Treasury debt held by the public, the US debt-to-GDP ratio is 135 percent, a manageable level, but similar to that of world economic powers like Portugal and Italy. Fortunately, however, this funding gap is easily fixable, without cutting benefits, if politicians will simply implement some combination of the proposals proffered by Alan Simpson and Erskine Bowles six years ago.

The most reasonable estimates of the present value of unfunded future Medicare and Medicaid obligations exceed $40 trillion, or almost three times the outstanding explicit publicly-held debt of the US Treasury. Combined with Social Security and Treasury obligations, this places the US sovereign liabilities at 355 percent of GDP, or more than twice the debt-to-GDP ratio of Greece. It is the rough equivalent of a family earning $100,000 a year with $310,000 of total debt outstanding, all of which is, to some extent, variable rate.

General Motors failed in 2009 because, from a practical standpoint, the company existed solely to fund its retiree benefits, eventually resulting in a federal government bailout.

Who will bailout the federal government?