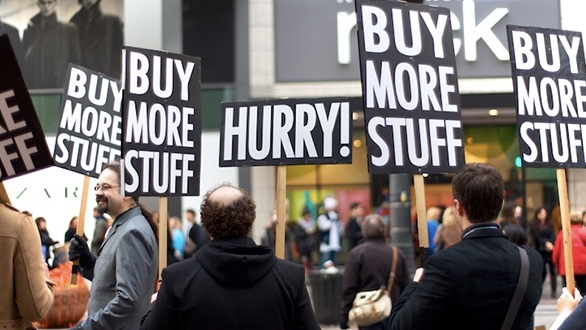 Inflation is almost certainly headed even higher – and expect some experts to place the blame on you.

You’re buying too much stuff. Christmas retail sales were a record $843.4 billion this season, an 8.5 percent increase from a year ago. This follows a then-record $777.3 billion in Christmas sales last year, an 8.2 percent jump from 2019 levels.

Since at least 2000, Christmas sales have never increased more than 7 percent in a single year. We’ve now had two consecutive years of more than 8 percent increases.

In those same two years US production increased a total of zero.

Country Economics: when people want to buy more stuff than is being made, the price of stuff goes up. Expect more increases in the official rate of inflation.

The Bureau of Labor Statistics tells us that inflation in the 12 months ending November 30, 2021, was 6.8 percent, the highest since June 1982. Several structural factors are at work to push the figure even higher. Producer prices are a leading indicator of future consumer prices. The Producer Price Index (PPI) rose 9.6 percent in November, suggesting further increases in the Consumer Price Index (CPI) – that is, consumer inflation.

In addition to producer prices, housing also foretells higher future reported inflation. In periods of rising prices, the government’s method of estimating changes in housing costs grossly understates actual changes in the cost of both owner-occupied and rental homes.

The government’s method of measuring rental rates is a lagging indicator that won’t fully reflect rent increases until current leases expire and are renewed. The methodology for estimating the cost of owner-occupied housing is so convoluted that officials can almost make the figure be whatever they choose – at least for a while.

According to US government figures, housing costs increased a laughable 3.8 percent in the past year. (The CoreLogic index of US home prices increased a more believable 18 percent.) Housing comprises nearly a third of the official inflation calculation; when that figure begins to reflect reality, it will almost certainly push inflation beyond November’s 6.8 percent figure.

In 26 years, the only specific investment advice I’ve ever offered in this column were things to avoid. Today I break that record and suggest that you consider Series I US Savings Bonds (“I bonds”) for money that you would otherwise leave in a money market fund or CD for the next 12-to-60 months. The rate on bonds purchased between now and April 2022 is 7.12 percent, and it resets every six months based on the CPI. An individual is limited to purchasing $10,000 of these savings bonds each year – something you should only consider after reading all about them at www.treasurydirect.gov.