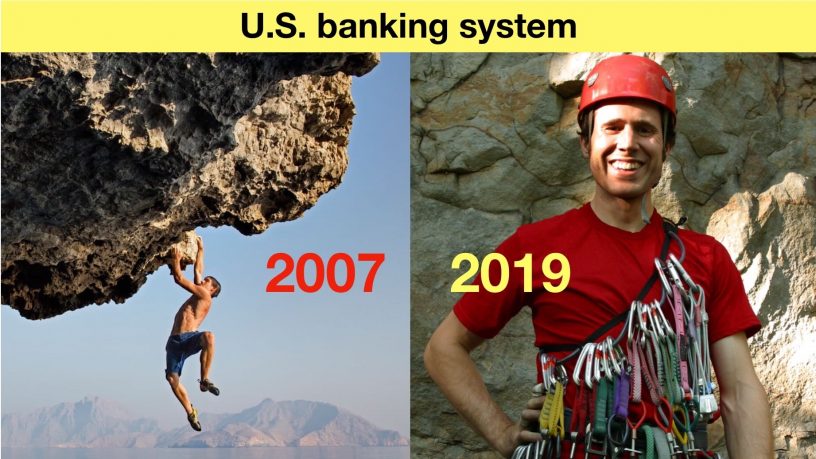 In August, the economy added 96,000 new private jobs, well below the expected monthly gain of 150,000. It was another rationale for superficial analysts to warn that the economy is on the brink of repeating the 2007-2009 carnage of the Great Recession. Those analysts are wrong. We may or may not be on the brink of another recession, but the underlying fundamentals of the economy are much different than those of a dozen years ago. Some are better; some are worse. However, almost every measure of the health of the banking system is stronger today than immediately preceding the Great Recession 12 years ago. This is significant.

A healthy banking system is critical to the functioning of an economy. Weak banks didn’t trigger the recession, but when mortgage default rates began to increase above historic norms, many lenders couldn’t withstand the losses. Once banks couldn’t trust homeowners to make mortgage payments, it didn’t take long before that distrust extended to transactions among banks. And at the core, our banking system – and therefore our economy – depends on people trusting that the other guy will do what he says will do.

So how does today’s economy compare to 2007?

Consumers are generally in better condition than 12 years ago, although some of the data are mixed. Americans’ savings rate has doubled since 2007. Even though student loan debt has tripled, total household debt as a percentage of Gross Domestic Product (GDP) has fallen. This figure is important because it measures the amount individuals owe relative to the overall size of the economy.

The primary and significant difference between today and 2007 is that the U.S. banking system is stronger by practically every measure. There are many reasons for that, including increased government regulations that, for much of a decade, placed limits on banks’ use of capital.

A strong and well-capitalized banking system will not prevent a recession, but weak banks can potentially allow a regular, garden-variety recession to spiral into near disaster. Measures of bank health tell us that the odds of that type of disaster are significantly lower today than at the beginning of the previous disaster.