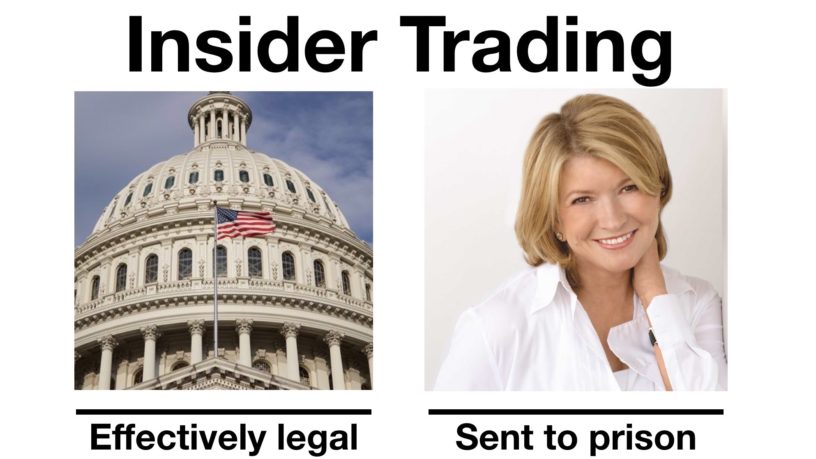 One of the tenets of a free market is that all participants simultaneously have access to the same information. When investors profit from inside information, they are stealing from market participants who abide by the rules. Because this principle is so sacred the federal government goes to incredible lengths to send people like Martha Stewart to prison.

It would be nice if the federal government demonstrated such concern for similar actions by members of Congress.

In 2012, Congress passed a law purporting to ban members of Congress from trading on inside information. Late on a Friday afternoon a year later, with practically no members in the chamber, the House unanimously voted to dismantle the law, rendering it practically meaningless.

It is still illegal for elected members of Congress to purchase a stock based on material, non-public information. But there is no legal prohibition on doing the opposite. That is, a congressman can introduce legislation or seek to influence regulators in order to benefit a company in which he already owns shares.

In 2016, Tom Price, the short-lived recent head of Health and Human Services, was still an active House member from Georgia who sat on both the Ways and Means Committee and the Congressional Health Care Caucus. In March of 2016, Price purchased shares of Zimmer Biomet, and then days later introduced a bill that would benefit the company.

Price’s investment and subsequent proposed legislation was legal, although it may have violated the House ethics rules – which is irrelevant, because Price is no longer a member of the House. And because the term “House ethics” is an oxymoron.

Examples of similar insider trading could fill a book. Just this week we learned of a New York Congressman who not only shared non-public information about an Australian biotech company in which he is the largest shareholder, he also touted the penny-stock to a number of his House colleagues, including Price.

For someone who claims to invest through a broker-directed account, Price curiously owned a number of small, obscure pharma stocks over which he held legislative influence.

A recent investigation by POLITICO found that 34 House and Senate members traded shares of more than 100 companies in the past two years, a number of them disproportionately trading in companies over which they have legislative influence.

I invest for a living and I didn’t trade 100 different companies in the past two years. Any member of Congress who trades that much is either emotionally unfit for office or has some “unique edge.”

The median net worth of congressmen is just over a million dollars – more than 22 times that of the median U.S. household. Perhaps Congress is full of Warren Buffetts. Or perhaps they operate on a different playing field.