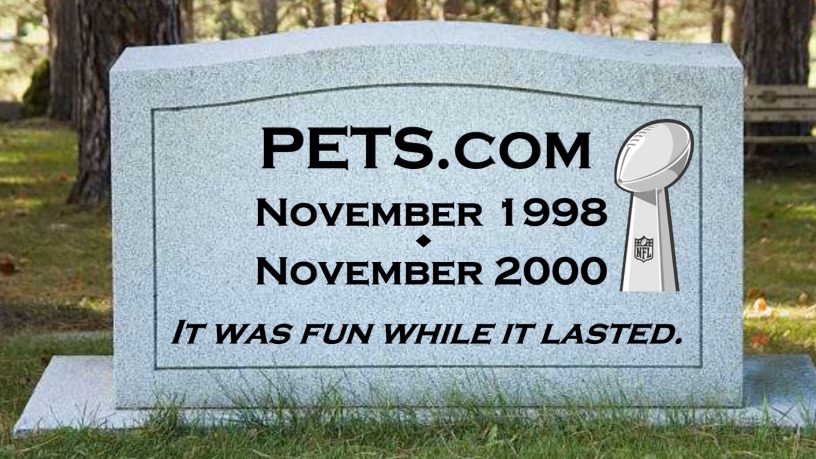 One of this year’s new Super Bowl advertisers was Coinbase, operator of the world’s largest cryptocurrency exchange platform. The company provides its users access to what some people describe as the most technologically sophisticated financial products in the history of mankind.

Coinbase was one of four cryptocurrency advertisers in this year’s Super Bowl. These companies want to solidify your financial future by enabling you to easily buy and sell Bitcoin, Ethereum, Litecoin and any other of the more than 10,000 different digital currencies that have been created so far.

It was impossible not to have a Yogi Berra, déjà vu all over again feeling during the ads. It felt eerily like watching the dot-com company Super Bowl commercials from January 2000 – just weeks before the bursting of the dot-com bubble.

The dot-com advertisers in 2000 promised disruption and innovation – just like this year’s crypto ads. Those rookie Super Bowl advertisers promoted themselves as well-positioned businesses, poised to deliver massive riches to their shareholders. Instead, they were spending huge sums of investor capital to create the illusion of prosperity. Once the investor capital dried up, the dot-com emperors were exposed as naked.

There is much that is wrong with our current central banking system, including the Federal Reserve’s too often mismanagement of the money supply. But the solution to a complex, systemic monetary problem is unlikely to be revealed in a bizarre Reese Witherspoon tweet or Matt Damon crypto ad.

How confidence inspiring would it be if Clint Eastwood or Snoop Dogg ads advised people to convert their US dollars into Japanese yen? I would wonder what was so wrong with Japan that it was paying people to hawk its currency. Consumers should have asked themselves similar questions before following Kim Kardashian’s paid recommendation of EthereumMax, just before the price of that cryptocurrency plummeted 97 percent.

Do not confuse EthereumMax with separate cryptocurrencies Ethereum or Ethereum Classic. I guess Caffeine-free Ethereum and Ethereum Zero are just around the crypto-corner.

Maybe one or more of this year’s Super Bowl crypto advertisers will survive, or possibly even thrive, by extending their trading platforms to accommodate more than digital currency. But it is difficult to forget that weeks following the dot-com Super Bowl in 2000, the tech-heavy NASDAQ Composite began a collapse that would total a 75 percent loss over the next 2.5 years. It would take 15 years before the index returned to its 2000 highs.