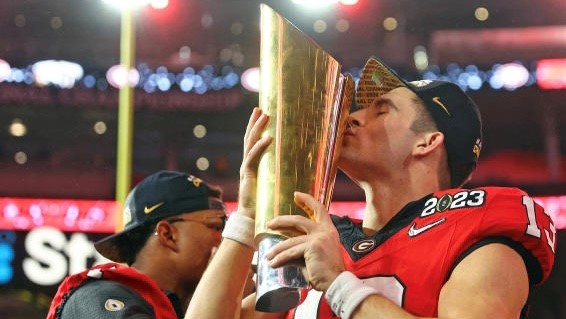 Although the margin of victory exceeded most people’s expectations, it should have surprised no one that Georgia defeated TCU in the CFP national championship game Monday night. Not because Georgia has superior players or coaches – but because of their jerseys.

In the past 30 years, 64 percent of the FBS (Division 1) national championships were won by teams whose primary jersey color was red. Yet red is the primary color for only 38 percent of the 130 FBS schools.

And this is not just a Georgia/Alabama phenomenon. It includes championships won by other redders such as Florida State, Southern Cal, Ohio State, Nebraska and Oklahoma. With a pantone track record like that, TCU didn’t have a chance.

Before rolling your eyes at my (hopefully) obvious tongue in cheek observation, think about how common it is for people to ascribe cause to something simply because of superficial correlation. Georgia did not embarrass TCU because red is athletically superior to purple. Nor did your 401(k) decline in 2018 or 2022 because of the scoundrel occupying the White House either of those years.

As evolved creatures, humans look for patterns as shortcuts to decision-making. The problem with that, however, comes when we “find” patterns that really don’t exist. In years following a red team winning the college football national championship, the S&P 500 averaged a 9 percent return. Of course, the S&P 500 averages about a 9 percent annual return in all years, regardless of football game outcomes.

If you believe that the identity of this year’s FBS national champion can help you predict this year’s change in the S&P 500, you might simply consider throwing darts at your 401(k) fund choices to make your investment decisions.

Just as it is tempting and financially dangerous to ascribe causality where none exists, it is similarly dangerous to assume an outcome is based solely on chance just because it defies a simple explanation. Last year’s stock market return is a perfect example.

The S&P 500, an index representing the stock price performance of 500 large companies, declined 18 percent last year. If, as I repeatedly say, the value of a business (or collection of them) is a function of the earnings of that business, how did the market drop so much last year when corporate earnings increased five percent? Doesn’t this “prove” that stock market returns are unexplainable?

No, it only proves that stock returns are unpredictable, not unexplainable. Corporate earnings do drive stock prices, but other factors are involved. A lot of other factors.

“Other factors” make things complex, whether we are talking about stock returns or football games. And many of us prefer easy explanations – jersey colors, political party – whether our thought process is logical or not.