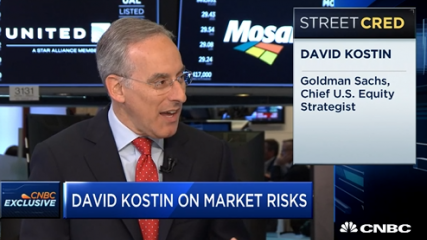 After recently writing that the recent increase in interest rates did not present a threat to the stock market, the chief equity strategist for Goldman Sachs spent the next couple of days on television making the case that investors needn’t worry about higher rates. Goldman’s expert, David Kostin, was very clear. “Investors ask whether the level of interest rates is a threat to equity valuations. Our answer is an emphatic ‘no.’”

Strangely, however, writing only a few weeks earlier, Mr. Kostin admitted that stocks prices “appear stretched based on virtually every standard metric,” but that looks are deceiving. “After taking interest rates into account, the [stock market] actually trades below the historic valuation.”

That is, in late January, low interest rates justified stock prices at historically extreme levels. Low rates were the magic that would keep stock prices climbing. But when interest increased, Goldman’s expert didn’t change his conclusion; he changed his rationale and kept the same conclusion: that stock prices are headed higher.

Although I’ve never met Mr. Kostin, I am sure he is a really smart guy. Why would his advice seem based on shifting logic?

Much of the investment industry would prefer to be wrong than to be different. That is, it’s moderately acceptable to make a poor forecast – even a wildly poor one – as long as all of your competitors make the same wrong prediction. Forecasts then congregate around each other, usually assuming that the next period will look very similar to the most recent one. The career risk is too great for a large commercial enterprise to go against the grain. The safest policy is to stick with the herd.

Goldman Sachs’ official prediction of a 16 percent 2021 increase in the S&P 500 looks an awful lot like last year’s 15 percent increase. It’s difficult to believe that is a coincidence. Goldman’s predictions often assume that this year is going to be like last year. Following a 24 percent S&P 500 return in 2017, Goldman forecasted even higher prices in 2018. Wrong. The market dropped 7 percent in 2018. Stock declines in 2018 led Goldman to a negative view for 2019. Wrong, again. The S&P 500 jumped 19 percent that year. The pattern extends for years.

It’s not just Goldman; the phenomenon is widespread. Simply extrapolating the recent past is easy, but naively vulnerable to massive error, especially at inflection points.

I lost three pounds last week. Using simple Wall Street extrapolation logic, I should lose another 120 pounds by year’s end. I don’t have very high confidence that will happen – nor do I personally believe stock valuations have suddenly become immune from changes in interest rates.