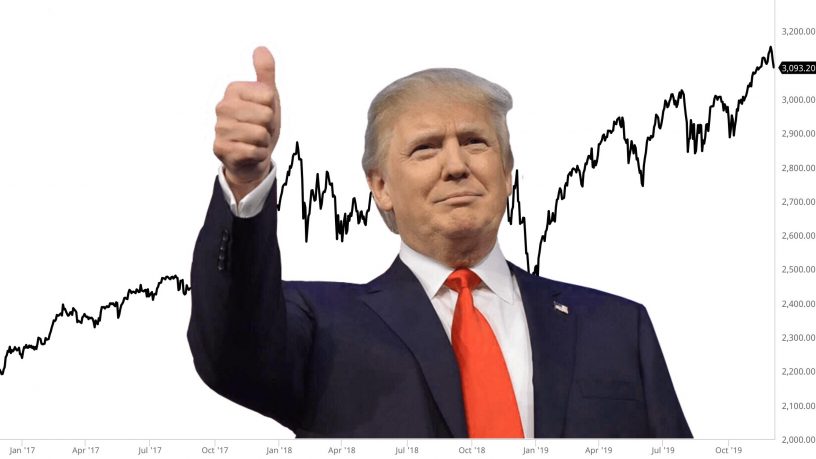 If you despise Trump, you likely credit “the continued Obama economic recovery” or “Wall Street billionaires’ love of Trump.” If you like Trump, you likely believe that the stock market is doing well because “we finally have a businessman in the White House” or that investors were relieved that Hillary Clinton wasn’t elected.

Both sides are wrong. The explanation is simple math.

The price of a stock (or group of them) is algebraically determined by two broad components: the earnings of a company and the price per dollar of earnings for the stock. (The price-to-earnings ratio, or simply P/E.) Many factors influence those two broad determinants.

The price-to-earnings ratio reflects numerous factors, including investor sentiment. It is mostly unchanged since November 2016, debunking the idea that stock prices are higher because investors like Trump. Essentially all the net increase in stock prices in the past three years is the result of an increase in corporate profits. Earnings have increased 52 percent, almost exactly equal to the stock market’s 50 percent price increase.

Why have earnings increased?

The largest component of the earnings increase is the 2017 cut in corporate tax rates. Half of the 52 percent increase in corporate earnings since 2016 is the result of lower taxes paid by corporations.

Since 2016 the value of the entire U.S. stock market has increased approximately $9 trillion. Since half of that increase is a product of corporate tax rate reductions, $4.5 billion of total stock market increase resulted from those cuts. How much did that stock market increase “cost” in terms of lower tax revenues? The Congressional Budget Office estimated that tax cut would reduce tax collections by $144 billion annually, or $1.4 trillion over the next decade – or less than a third of the $4.5 trillion it produced in stock market gains.

Another way to look at it: over ten years, the recent tax cuts will cause the federal government to borrow an additional $1.4 trillion. In exchange for assuming that debt, taxpayers (investors, actually) received an immediate $4.5 trillion increase in the value of their collective 401(k)s, IRAs and other investment accounts.

The remainder of the earnings increase is mostly a result of lower interest rates, an increase in corporate revenues (the economy has grown), an improvement in operating margins and higher consumer spending.