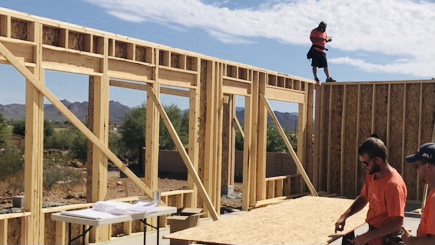 There have been plenty unintended and unanticipated consequences to the measures associated with lock downs and the government policies designed to mitigate their economic damage. Some were fairly predictable: if you shut down restaurants, restaurant workers and owners won’t make any money.

But some of the outcomes were totally unexpected – none more so than the meteoric rise in real estate prices. In June, the median sales price of a single-family Knoxville home was $275,000, a 21.4% increase from a year ago.

The Knoxville Area Association of Realtors reports that of the 2,232 Knoxville homes sold in June, half of them sold in four or fewer days.

I never saw that coming.

However, sometimes the “right” thing happens for the wrong reason. A trigger is not the same as a cause. A reluctancy to allow strangers to traipse through their houses may have reduced the supply of houses offered for sale. Financial Covid windfalls enjoyed by 131 million Americans, combined with reduced restaurant and vacation expenses, may have produced excess cash that people feel compelled to spend on something. But those are merely triggers. The underlying cause of this massive spike in house prices is that new construction, never recovered from the mortgage crisis of 2008, has fallen well behind population growth.

Since 2008, Knox County population has grown 14%, or almost twice the 7.6% increase in the total housing units in the area. Why? Because new home construction plummeted following the 2008 recession and has only recently begun to catch up.

Since 2008, however, new permits have average only 1,900 annually, creating a cumulative shortage of 22,000 new housing starts. The recent housing price spikes are merely part of a correcting mechanism for more than a decade of underbuilding.

Blaming the trigger, rather than the underlying cause, is a fairly common theme in economics. The 2000 stock market crash wasn’t caused by a bunch of now-gone, money-losing internet stocks. The November 2016 and November 2020 spike in stock prices weren’t, at their core, the result of Donald Trump or Joe Biden’s election. The trigger for the 2008 recession was home foreclosures, but the root cause that set the stage for the decline was much more complex.

Is this a bubble or are we establishing a new plateau for housing prices? A free-ish market is a wonderfully self-correcting system. In the first 6 months of this year, there were 2,147 new single-family building permits in the Knoxville area, which puts Knoxville on a record pace for annual new housing starts.