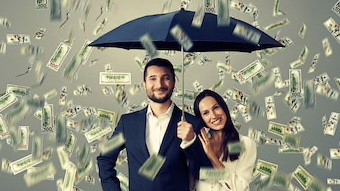 In my experience, the majority of people consider themselves to be some degree of middle class. If asked if they were rich, most people reading this column would answer no. And by almost any objective definition, most of them would be wrong.

We first must define “rich.” Most surveys seeking to compare financial wealth (as opposed to standard of living) use some sort of income definition. If you earn above a certain dollar amount, you are rich. In reality, there is a significant difference between being rich and having a high income. Financial wealth (being rich) is about net worth and a person’s accumulation of appreciating assets (less liabilities.) Because of lifestyle decisions, plenty of people with very high incomes have ridiculously low net worth. Other lifestyle decisions allow folks with modest incomes to accumulate significant net worth. That is, they are very rich.

One thing is certain: a person’s house and car usually reflect his use of cash flow, debt or both – not necessarily his wealth.

Nevertheless, most surveys discuss wealth in terms of income because that data is most readily available. Even using that flawed benchmark, are you rich?

A recent Business Insider article assumed that being rich is a relative measure: a family with twice the median income of their community is rich. Using that definition, a Knox County family with annual income of $105,000 is rich. Surprised?

In Knoxville, if you earn $105,000 and you’re house shopping, I suspect you, like my wife and I have many times, spend a lot of time driving around on Sunday afternoons looking at massive houses, thinking, “where do all these people work?”

Remember, a person’s house may give some hint about a person’s wealth, but it does not define it.

If your household income is $105,000, your earnings are approaching the top 10 percent, nationwide. According to the Economic Policy Institute, only 10 percent of U.S. households have annual income greater than $118,400.

Compared to the rest of the world, a rich Knoxville family is almost off-the-charts uber rich, with earnings in the top 1.4 percent of the world’s population and 34 times that of the global median. (Pew Research Center)

According to the Kaiser Family Foundation, Tennessee ranks 42nd among the states in terms of household income, which explains some of our comparative inferiority complex when we contemplate our own wealth. (Thank God for West Virginia and Mississippi.) The rankings also likely explain how the median income in Washington D.C. is 24 percent higher than the rest of the country, exceeding the median in every state. Washington is a city full of lobbyists and politicians, where the only industry is spending other people’s money. Apparently, that pays pretty well.