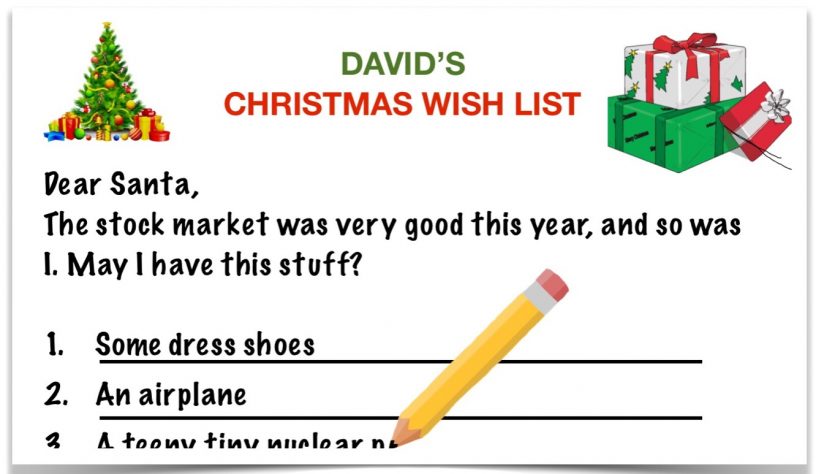 With only a few shopping days remaining before the big day, here are a few gift ideas for me. One or two items from the list are fine; don’t feel obligated to buy everything.

I need a really comfortable pair of dress shoes, size 14E. An extra-long tie that will actually make a nice knot. Some nice, no-iron dress shirts. A full-sized iPad that will fold and fit in my pocket.

I don’t need a car that goes from zero to 60 in five seconds. I want one that goes from 85 to 65 in less than one second. I also want a fully autonomous driving car. Or my own personal Morgan Freeman.

A much larger tractor. Farm and recreational vehicles that always start.

A wi-fi extender that reaches every room in my house. My own tiny, home-sized nuclear power plant. Wireless AC electricity. Why do we still have extension cords running all over our houses?

Someone to organize all of the dangling cords under my desk. Someone to cleanup and synchronize the contacts and photos on my phone, two iPads and desktop computer. Infinite battery life on all devices. A trustworthy, easy-to-use password manager.

A tracking device for all of my tools.

Another 20 percent-plus year for stocks. A weekly massage, either at home or in my office. No Christmas conversations about impeachment. (After all, this is a wish list. Why not ask for a few things that are hedonistically outrageous? It’s not like I’m asking Santa for an airplane.)

A new brown dog, passive enough to have a cool personality, but aggressive enough to stand up to our existing brown dog. One more day of quail hunting with my father. Lunch with Oprah Winfrey, Bill Belichick, Kris Kristofferson, Charlie Munger, Tony Robbins, Jeff Bezos and Judge Judy.

More time with my handful of great friends.

One of those diagnostic devices I can plug into my car’s computer that can interpret the 8 zillion messages on my fancy dashboard.

The continued demise of the NCAA. Let’s go ahead and completely turn over college football to ESPN. It can pay a fee to use school logos and rent stadiums and run the regular season just like it does the bowl season.

Commercials that are the same volume as the show.

Sideline passes to the Super Bowl. Grandstand tickets for the Tournament of Roses Parade. Front row seats to an MMA fight. (Given the way those guys sweat and bleed, maybe 2nd row seats.)

A fully effective robo-caller blocker for my cell phone. I don’t care if open enrollment has started and I don’t have a student loan.