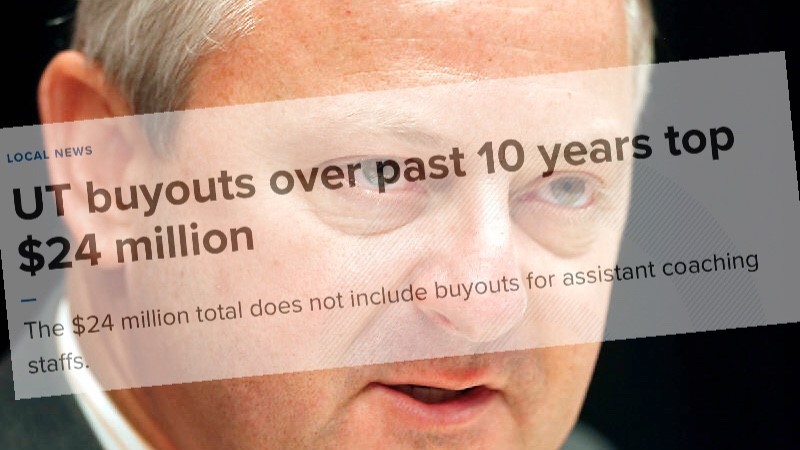 My reaction is clearly the minority, but I wasn’t bothered when eight assistant Tennessee football coaches initially declined voluntary pay cuts in an effort to mitigate the Tennessee Athletic Department’s expected $30 million to $40 million football revenue shortfall. Of course, my opinion would be different if I were the athletic director and responsible for minimizing the department’s net loss this year and next. Football is a business, and those eight men made a business decision. And whether they realized it or not, they were guided by a principle that investors would be wise to implement.

A person can love an organization or institution, but an institution can’t love you back.

Ignore for a moment that the shortest-tenured member of the football staff was not asked to take a pay cut. Only four games into his first season with the Vols, defensive line coach Jimmy Brumbaugh was asked to go home and collect the remainder of his $1.3 million contract to not coach for two years. Assistant football coaching can be a lucrative career, but not a stable one.

In the past decade, the average tenure of a Tennessee assistant football coach has been 1.8 years.

What do Robert Neyland, Doug Dickey, Lane Kiffin and Jeremy Pruitt have in common? They are the only head football coaches in the history of Tennessee athletics who weren’t fired from the position. I wouldn’t worry that some position coach isn’t demonstrating sufficient loyalty to his employer; there is an almost 100 percent chance that he will eventually be fired – either by Tennessee or some future employer – and when he is, that athletic department will pay the severance described in his contract, and not a penny more.

Loyalty between trustworthy individuals, including one’s coworkers or boss, is among life’s most rewarding experiences. But loyalty to an institution is a one-way street fraught with one-sided risks.

What does this have to do with investing? You should never be emotional about your investments. Shares of Amazon or an index mutual fund deserve neither your love nor loyalty. You can love an investment, but even if it serves your purposes, it will never love you back. Some people have a tendency to personify stocks, developing personal relationships with them and the companies they represent. But your investments don’t even know you exist, so don’t allow your fondness for an institution – whether it’s a stock, mutual fund or football program – to affect your investment decisions.

Like any other institution, at no point will a common stock be offering you preferential treatment. The best way to optimize all of your investment decision-making is to view through a dispassionate lens.