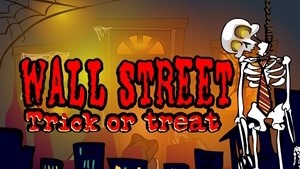 The S&P 500 declined almost 7% in October, the largest monthly decline since September 2011.

October has a bad investment reputation. The three largest percentage daily declines in U.S. stock market history all occurred in October. The largest Dow Jones Industrial Average (DJIA) percentage decline occurred in an October. Four of the ten largest DJIA point declines occurred in October, almost five times what would be expected from a random outcome. Both the Motley Fool and Investopedia have entries discussing the “October Effect” for stocks. Even Mark Twain took an investment swipe at October in Pudd’nhead Wilson.

Despite some pretty horrible October returns, the average S&P 500 return in the 91 Octobers since 1928 is 0.4 percent. That is significantly less than the 0.88 percent average return for all 12 months, but much better than the 1.0 percent average loss during Septembers.

For an investor, October is irrelevant. So are the returns during any single month, however disastrous or wonderful they are. Even if you were able to avoid those horrible days in October, or could pick the specific Septembers during which the market would decline, it almost certainly wouldn’t provide you any long-term benefit. Based on my observations, successfully avoiding a sharp, short-term stock decline can actually cost you money in the long run. Guessing right can cause a person to confuse luck and randomness with skill.

In the summer of 1987, a client was adamant about getting out of the stock market. I was young, armed with a brand new MBA and all of the statistics proving the long-term superiority of stocks over other asset classes. My client just “had a feeling” that the market was about to decline. He was right. From August 1987 until October, the DJIA fell 37%, to 1700. Despite the decline, he wouldn’t get back into stocks. From 1966 to 1982 he had seen the DJIA always retreat to the 1000 level, regardless of whatever new peak it set in the interim. He was going to wait until it got back to 1000 before getting back in.

No one can know when the next bear market will begin. Perhaps it started last month. Some people thought it started in January of this year, when the DJIA dropped almost 12% in two months – followed by a 13% gain in the subsequent 6 months.

With enough data, we can always find patterns in past events. However, there is often significant variability around those patterns, even over decades, leaving them of limited use in predicting the future.