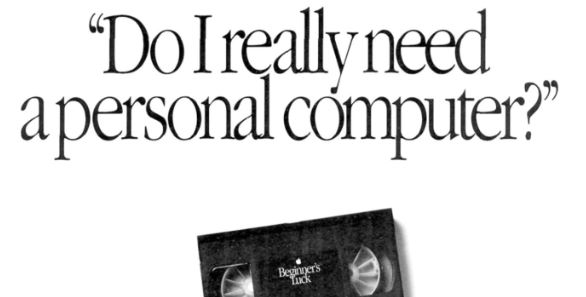 Last week I read a 1987 Sports Illustrated article about John Madden and two things stood out to me. The articles were much longer and some of the ads were comically naive.

The article length probably shouldn’t have surprised me. Attention spans are almost certainly shorter today than 35 years ago, despite a doubling of US prescriptions for ADHD in the past decade. Images on television shows (or whatever they’re now called) change about every 5-to-7 seconds, even on news programs. I think Walter Cronkite and Bill Williams would sometimes be the primary or only image during a newscast for several minutes at a time. Most of today’s print/web articles (including this one) take no more than two or three minutes to read. The October 26, 1987 Sports Illustrated had three articles that were more than 2,000 words long. This column, fairly typical for a newspaper today, has fewer than 500 words.

The most interesting thing from that Sports Illustrated, however, was an Apple Computer ad featuring the headline, “Do I really need a personal computer?” As silly as the question may seem today, it obviously was not in 1987. The ad offered to send personal computer skeptics a videotape titled “Beginner’s Luck: Real People Who Found the Right Computer the First Time Out.”

That’s funny. For $3.95 Apple Computer would send people a VHS tape to convince them to buy an early version of one of the greatest technology advances of a generation. It’s also an on-point reminder of the John Sculley era at Apple, when Sculley essentially forced Steve Jobs out of the company because Jobs didn’t agree with Sculley’s strategy of competing head-to-head with IBM in the personal computer market. Sculley wasn’t a tech guy; he was the marketing expert from Pepsi who was known for the very successful Pepsi Challenge taste test ad campaign versus Coca Cola. The 1987 Apple VHS ad was part of his effort to replicate his soda success with personal computers. Sculley saw IBM as Apple’s Coca-Cola. However, Sculley’s narrow focus on the competition hurt Apple’s ability to innovate.

The Apple ad is a great example of how even really smart and accomplished people can make major strategy mistakes. More importantly, however, it is a reminder of the importance of imagination and creativity. In 1943 the president of IBM famously forecast a world market for five computers. The founder of Digital Equipment said he could think of no reason anyone would want a computer in their home. And in 1997, Microsoft’s Chief Technology Officer declared IBM the winner in the market for personal computers and that Apple Computer was dead.

1997 was also the year Steve Jobs returned to Apple as CEO.