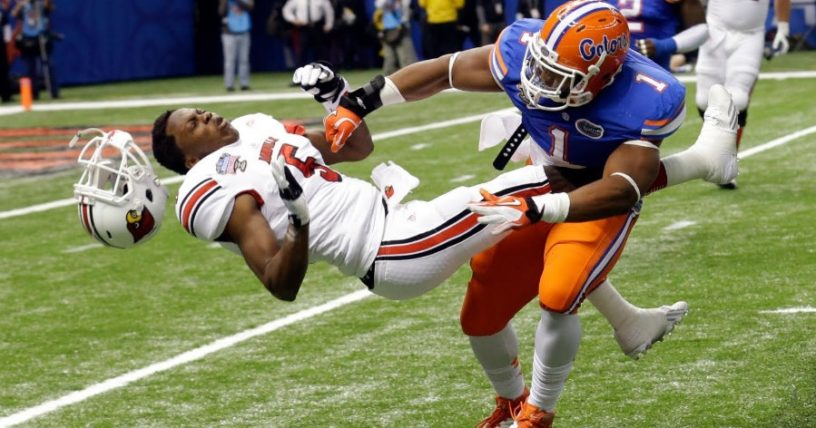 The NCAA is among the three most morally corrupt organizations on earth.

I’m not even talking about paying college athletes; no one with an opinion on that subject is going to change his mind.

Instead, consider the plight of Donald De La Haye, a (now former) University of Central Florida kicker. His YouTube channel attracts hundreds of thousands of viewers, generating ad revenue for the young entrepreneur. NCAA rules, however, prohibit a student-athlete from personally benefiting from activities “that references his status as a student-athlete or depicts his football skill or ability.”

Other than UCF’s former backup kicker, who benefits from punishing De La Haye? This is only one of thousands of rules aimed at protecting the NCAA’s grip on every penny generated by college athletes, under the laughable guise of “maintaining amateurism.”

“Those linebackers are on campus to get a free education, not to pimp themselves out to autograph seekers.” The players aren’t pimps; the NCAA is. ESPN is the john. We college football fans are mostly unknowing voyeurs, watching the transaction on television seven days a week.

The NCAA’s mission is “to be an integral part of higher education and to focus on the development of student-athletes.” How do Tuesday-night games contribute to that goal? How about fake classes for athletes at the University of North Carolina? At least UNC defended itself against NCAA charges with a grotesque, but rare honest response, claiming that the NCAA lacked jurisdiction over its academic programs. So much for being “an integral part of higher education.”

The Baylor football program, accused of fostering a culture of violence against women, dismissed its athletics director and head football coach after dozens of women accused players of rape. Baylor has thus far avoided any NCAA sanctions for a football program that arguably protected rapists, but if I buy a non-scholarship football player a textbook he could lose his eligibility to play. The reason? It is a violation of NCAA rules for a student-athlete to receive an extra benefit as a result of his playing football. The NCAA has no specific rule prohibiting rape.

The NCAA’s transfer policy is downright cruel. A player who changes schools forfeits a year of his four years of eligibility. If the player’s head coach is especially petty (remember Tennessee’s Derek Dooley?) and won’t bless the transfer, the player misses two seasons.

Some of the best human beings I know work in college athletics. They deal directly with athletes on a day-to-day basis, loving and nurturing the young people under their care. Distant administrators are different. If they actually cared about student-athletes, they would spend part of the $10.8 billion in NCAA tournament money on fighting opioid abuse or providing meaningful post-collegiate medical care for chronic athletic injuries. More schools would fund continuing education for players who, while on campus, believed the refrain of some coaches: “You have the rest of your life to get an education; you only have four years to play football. Where are your priorities?”

The Sherman Antitrust Act states that “every contract … or conspiracy (resulting) in restraint of trade or commerce is declared to be illegal.” By any reasonable lay reading, the 150 largest athletic schools and their agent, the NCAA, conspire to restrain commerce. Exhibit 1 is Donald De La Haye.