Sir John Templeton once famously said that the most dangerous words in investing are “this time it’s different.” In the past 100 years, U.S. stocks have experienced 22 bear markets, the most recent of which began two weeks ago. The market eventually recovered from all 21 previous bear markets – and we expect this one to be no different. (We sent you an email on June 14 with historical bear market statistics and a white paper about bear market severity and duration. If you missed the email and would like us to resend it, call our office or email marsha@mooncap.com.)  That doesn’t diminish the very real pain of the worst first half year for stocks in 50 years – a 20 percent S&P 500 decline and a whopping 30 percent drop in the Nasdaq. 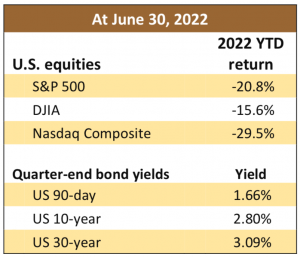 Other than briefly in March of 2020, it has been 13 years since the last bear market. There is no law that requires a bear market every five years, but the stock market has been overpriced for quite some time, so this decline was overdue. The fundamentals underlying this decline are much different than those in 2007-09, but the mechanics of this bear market are no different than that of any of its predecessors: it is a correction of an economic or other financial excess.

Inflation occurs when spending increases more than does the amount of stuff available to buy. By influencing interest rates and the money supply, the Federal Reserve can adjust consumer spending patterns. It can accelerate people’s spending with easy money/low rates or delay spending with higher rates and restrictive monetary actions. While recent Fed tightening has thus far been measured and fallen far short of public rhetoric, at least Chair Jerome Powell is finally acknowledging that inflation is both real and non-transitory.

The Fed can fight inflation, but it will come at a cost. Economic strength is a function of productivity – and the Federal Reserve has no tools that improve economic productivity. This means that central bank (in)actions are likely to result in only two possible outcomes:

During the economic malaise of the 1970s, the Federal Reserve managed to do both. Half-measures in the mid-1970s extended the inflationary period, eventually requiring even more drastic and painful Fed action.

Comparisons of today’s economy to that in the 1970s are common and to some extent valid. It’s not a perfect comparison, but there are the beginnings of some unavoidable similarities. However, in their eagerness to compare the current economic environment to that of the 1970s, investors and commentators usually overlook a somewhat tempting panic point: that from 1965 to 1982, the Dow Jones Industrial Average increased a grand total of zero points. (The DJIA 1000 mental threshold was so powerful at the time that when the stock market crash of 1987 sent the DJIA from 2700 to 1700, one client refused to move any of his cash to stocks until the market got back below 1000. It never did.) 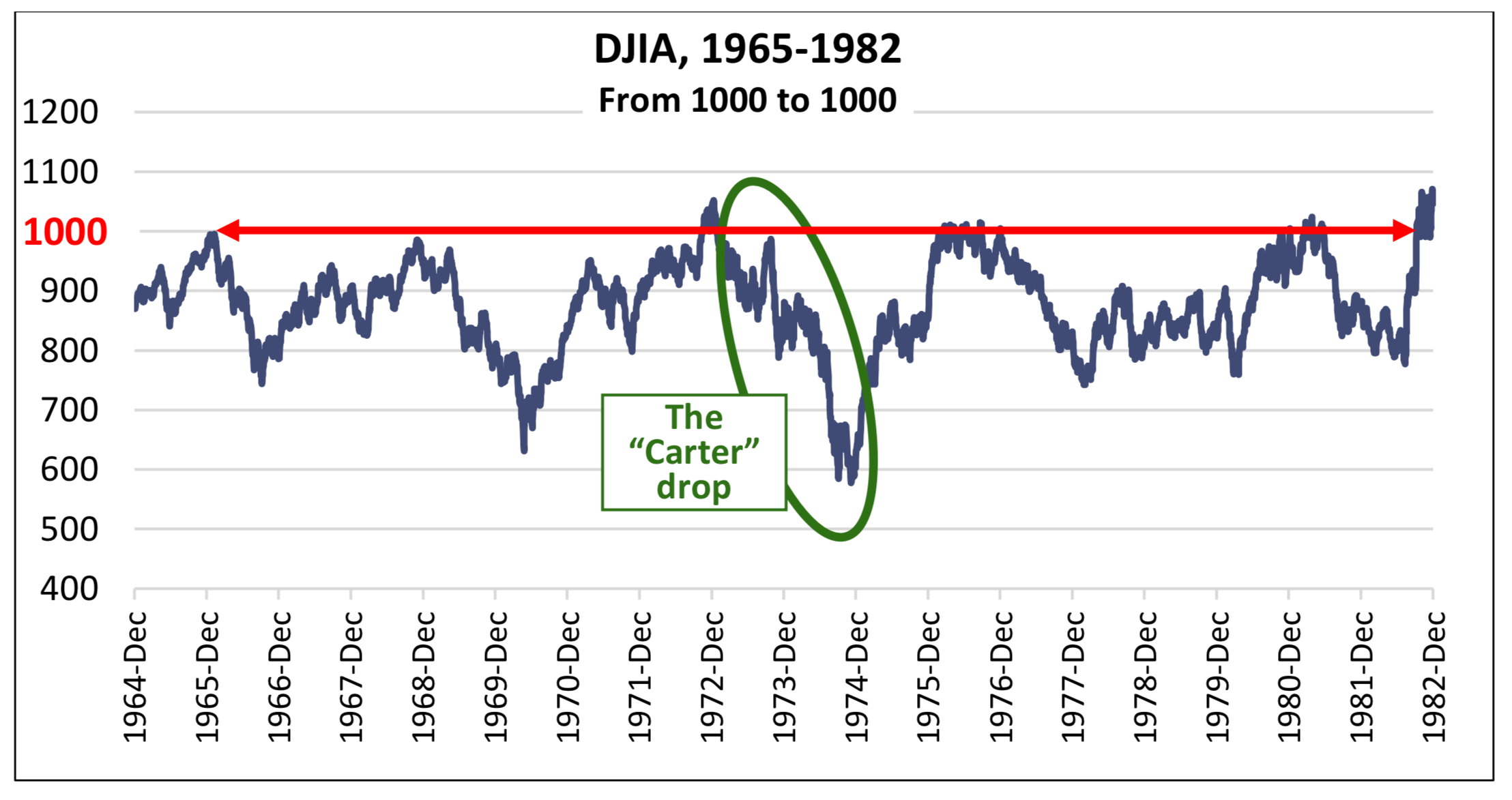 At first glance, this chart is depressing, if not scary. But there is a significant amount of information in this simple graph, some of it even encouraging – and all of it useful.

Although it is tempting to consider this entire 17-year period as a single “market,” there are actually five separate bear markets on this chart, the most severe of which was the 1973-74 forty percent drop, often referred to as the Jimmy Carter bear market, despite occurring completely during the Nixon and Ford presidencies.

Inflation spiked precipitously in 1973 and remained persistent (that is, non-transitory) for almost a decade. From 1973 to 1981, inflation averaged 9.0 percent annually. The effect on most broad classes of financial assets was meaningfully destructive. The S&P 500, DJIA and 10-year Treasury all lagged inflation, providing a negative (inflation-adjusted) real rate of return for those nine years. 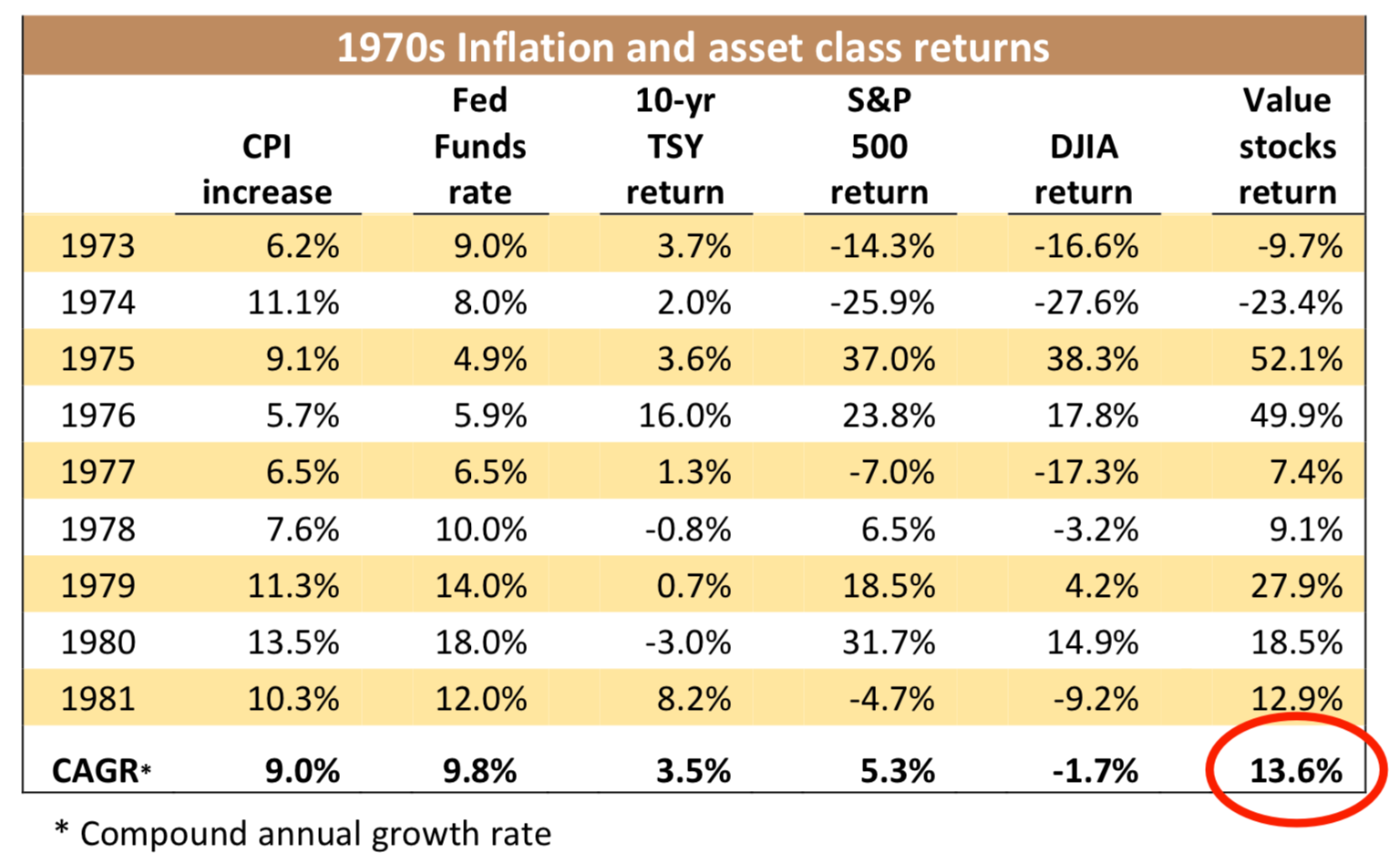 But not every asset class suffered a decade of decay. Value stocks outpaced inflation with a 13.6 percent annual return during this period, earning more than twice the return of the S&P 500 and a full 15 percentage points annually better than the Dow Jones Industrial Average. We have no idea how long either this current bear market or inflationary period might last, but if the recent trends continue and the future looks anything like the 1970s inflation, our focus on profitable, value-priced securities should continue to do well – both in absolute terms and relative to stock averages, bonds and inflation.

Following the market’s decline this year, the P/E on the S&P 500 has declined to about 18. While this is higher than the long-term average of 15, it is significantly less frothy than the 26 we witnessed at the beginning of 2021.

Our portfolio trades at 11 times our estimate of 2022 earnings.

Low interest rates and easy money can both hide and encourage a lot of unwise decisions, causing people to confuse the effects of leverage and luck with skill. The ability to borrow almost limitless funds at near zero percent can allow any novice investment-ish person to turn a five percent asset return into a levered return of 20 percent annually. But if the underlying asset loses five percent, the previously genius leveraged hedge fund manager would lose almost 80 percent of his capital. Or, more accurately in most cases, his investors’ capital. 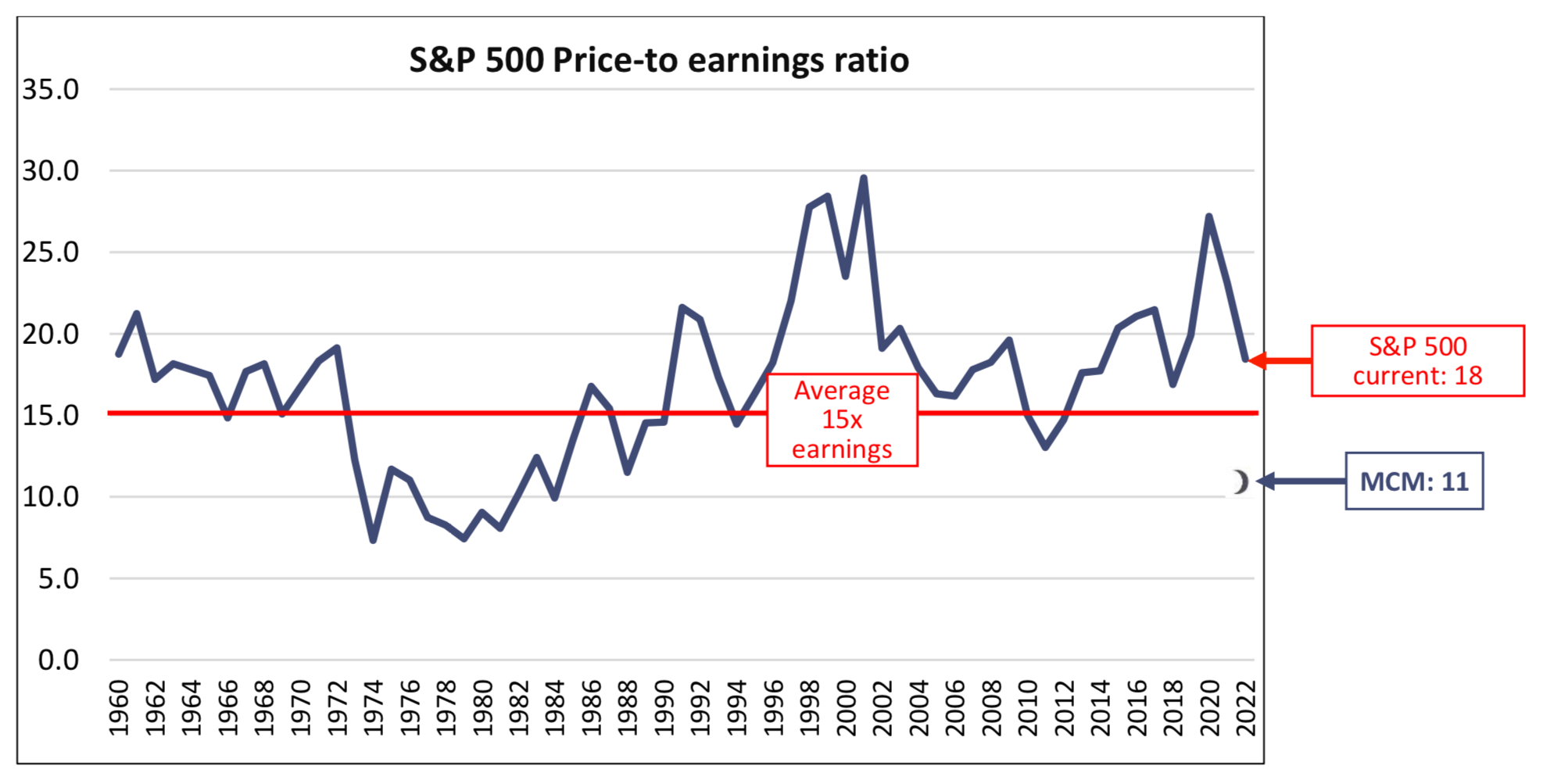 While it is true that a rising tide lifts all ships, this year’s 20 percent broad market decline, combined with higher borrowing costs and a 90-plus percent drop in much of the next super asset class (Crypto! NFT!) have exposed a lot of naked swimmers. 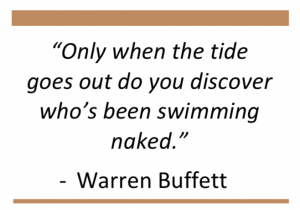 We expect there may be more pain to come on this front.  Contrary to the popular notion that cryptocurrency offered a way to hedge against future inflation, the price response to rising interest rates has been similar to that of the most highly levered risk assets.  Almost weekly, another crypto-based network is reported to be facing collapse or suspending redemptions. Of particular irony, the head of one of the largest exchanges recently blamed the Federal Reserve for the downturn in crypto, which if true, simply shatters yet another core tenet of the cryptocurrency canon – that it would free wealth from the shackles of central governments and the Federal Reserve.

The extraordinary performance of the stock market following the initial 2020 Covid lockdowns was led by a quintet of businesses that benefitted from people pretending to work from home. From the market’s 2020 low in March, these so-called FAANG stocks (Facebook, Amazon, Apple Netflix and Google) increased an average of 125 percent during the remainder of the year. The skyrocketing performance of these stocks has come to an abrupt reversal this year, providing us with an opportunity to add Meta Platforms (META) to the portfolio. (Meta is the new moniker for the company formerly known as Facebook.) 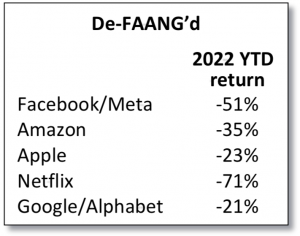 For most of the past decade, Meta’s share price has marched almost lockstep with its meteoric rise in earnings and free cash flow. That was until almost a year ago. Since August 2021, Meta shares have dropped more than 50 percent, while its free cash flow has increased 60 percent.

While Meta is facing certain headwinds related to changes in Apple’s latest operating system release (iOS 14’s optional identifier for advertisers (IDFA) blocking) that impact Meta’s ability to track and thus effectively target its user base, we believe the company will be able to effectively mitigate these changes. Meta estimates that these changes will result in a $10 billion headwind in 2022.  To the extent that the company solves the IDFA problem over time, improvements in returns on advertising spending could result in a partially recovery of revenue dollars that creates a future tailwind.

Meta is also spending aggressively on augmented and virtual reality through the company’s Reality Labs division.  Meta’s vision is that, over the next decade, the expansion of virtual reality may create the next major computing platform after mobile.  The company is investing heavily in this area, dedicating more than $10 billion per year in the form of operating expenses running through the income statement.  While the company is currently being penalized for these investments, we think it is more appropriate to view these costs as free options, given that the plug can be pulled at any time if the investments don’t develop into meaningful revenue contributors.

Meta’s core advertising business is clearly entering a more mature phase of its life cycle – or, at least, it is no longer the tiny newcomer in the advertising industry. Meta is now a $120 billion-a-year business, more than ten times its size in 2010. Starting from a base of less than $2 billion in 2010, Meta’s revenues have grown more than 40 percent annually. While it is easier to produce 40 percent annual revenue gains with a $2 billion business than with a $120 billion one, we expect that Meta will continue to siphon ad spending from traditional broad-based, “shotgun approach” legacy ad platforms, such as newspaper, magazine, radio and television. The digital ad space continues to operate as a duopoly shared by Facebook and Google (with Amazon gaining slight ground) and digital ad spending will continue to grow over time.

(For any readers younger than 30-years-old, please ask a parent or grandparent to explain what newspapers and magazines are. Or used to be.) 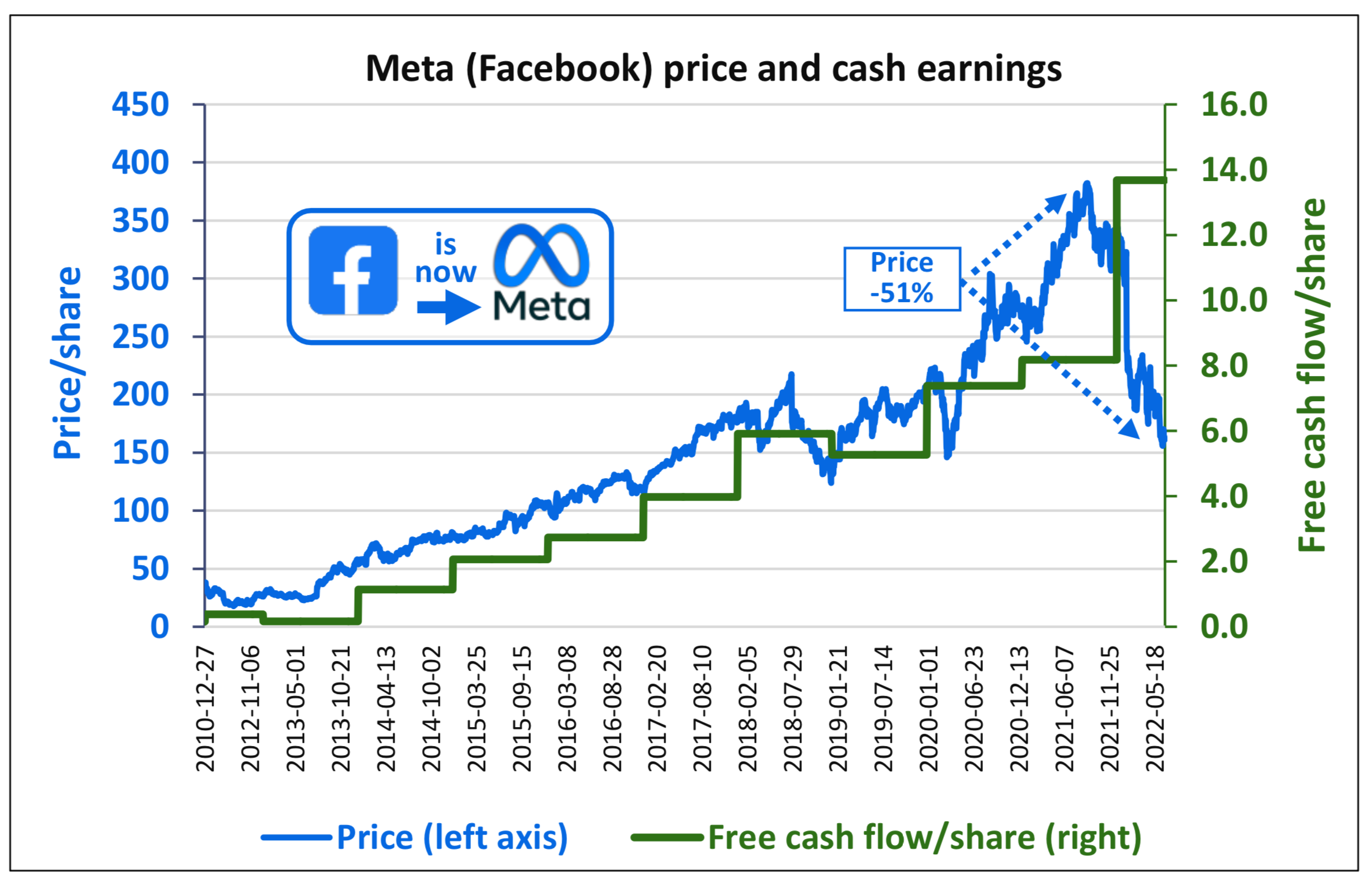 While the company’s user base is no longer steadily increasing due to the law of large numbers (monthly active users are 3.6 billion compared with roughly 4 billion internet users outside of China), it has multiple avenues to drive additional revenues.  There is an enormous gap between the annual revenue per user in North America and the rest of the world.  There also remains a monetization story at its subsidiary WhatsApp, which has yet to generate profits but has more than doubled users since Facebook’s $22 billion acquisition in 2014.  (For those over 50, ask a teenager to explain WhatsApp, the world’s most popular messaging app.) However, at today’s prices, we don’t think we are paying for any future growth and don’t believe it is needed for an attractive outcome.

Following its massive price drop this year, Meta trades at a market capitalization of roughly $435 billion, with a debt-free balance sheet that carries more than $50 billion in cash and investments. Our purchase price of less than 7 times pre-tax earnings is not only lower than that of many no-growth consumer names, but it is also as low as many industries in secular decline.  Meta is a high-margin monopoly that trades as if it is a coal company.

A departure and a personal note

It isn’t typical for a firm like ours to announce the departure of a key employee, but we have a situation that is a bit unique. At some point in the past four years, there is a chance you may have interacted with one of our young associates, Bethany Carlson. What you may not have known is that her full name is Bethany Carlson Moon. She just graduated from the University of Tennessee with a bachelor’s degree in finance, with minors in both accounting and theater. Bethany is moving to Austin, Texas, where she will continue her career with a regional wealth management firm and almost certainly attend football games of the other UT – the one with the ugly shade of orange. Her twin brother Wheeler, a May graduate from the University of North Carolina School of Arts, is currently working as a lighting designer at the Weston Theatre Company in Vermont. He will be the assistant lighting designer this fall for the touring production of Broadway’s Elf, the Musical.