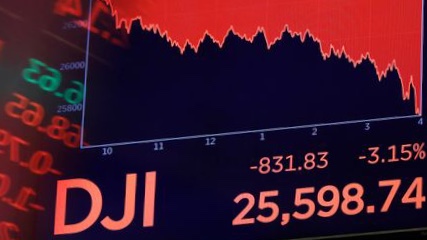 Given these price drops, what should you do right now?

Surprise: it depends on your specific situation and the eventual purpose of the money you have invested in stocks. Your action should not depend on a forecast of where the DJIA might be a month or even a year from now.

If your intent is to liquidate some portion of your stock holdings within the next year for some known cash need, the money shouldn’t have been in stocks in the first place. Despite averaging a 10% annual return, at some point in a typical year, the overall stock market declines 14.2% from its peak level that year. You can’t predict when that is going to happen. You can’t when it has already begun to happen. You can only know in hindsight, and by then you may be forced to sell stocks at depressed prices to make a house down payment, pay some college tuition or simply pay some ordinary living expenses.

If you made the mistake of having money in stocks that you know you have to liquidate within the next year, my suggestion is to approach your situation methodically rather than emotionally.  First, determine if you have any alternative sources for the cash you need – even if it’s only a short-term solution. If you don’t have another option for creating the cash and you must liquidate some of your stock positions, do it on a fixed, pre-determined schedule between now and the date you need the funds. Dollar cost average your way out of enough stocks to meet your cash needs. If you need $20,000 from your stock portfolio a year from now, sell $1,600 worth of stock on the same day of each of the next 12 months. It is, of course, possible that this plan, compared to selling everything you need now, could result in selling at lower prices. However, since the S&P 500 increased in 77% of the years since 1926, the odds favor the market being higher a year from now.

If you are currently adding money to a 401(k) plan and are more than 5 years away from retirement, celebrate the decline! Okay, maybe that’s a bit extreme. No one finds pleasure in seeing his account value decline. But if you’re putting money in stocks each pay period, it is better to do it when the Dow is 24000 rather than 27000.