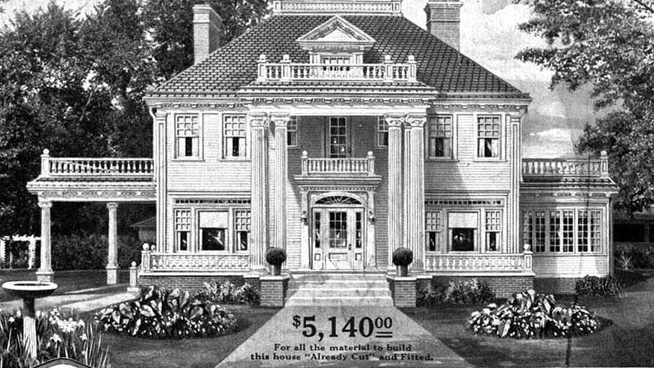 Earlier this year, e-commerce giant Amazon invested in Plant Prefab, a manufacturer of prefabricated homes, planning to speed the adoption of its Alexa smart home device technology in homes. Maybe it is a fantastic business move. Or maybe it is simply history repeating itself. Or both.

Amazon is not the first leading retailer to sell prefabricated homes. A hundred years ago, the iconic Sears catalogue offered houses in kit form. For $2,215, a customer could purchase the materials needed to build The Pennsgrove, a beautiful French country home with exposed, rough-sawn oak ceiling beams, a back terrace extending the width of the house, a two-car garage and living quarters for a household employee. The look of the fits perfectly in the Old Westmoreland neighborhood in West Knoxville.

From 1908 until 1942, more than 70,000 American families purchased and built these mail-order houses, at least 10,000 of which are still in use. I’ve seen one: a well-maintained Sears Magnolia house in Piedmont, Alabama. (Here is a current street view of this house.)  It is a stately, two-story, ten-room, four-column colonial mansion that looks remarkably like the beautiful home at 4024 Kingston Pike. (Street view of Kingston Pike house.)

Sears’ foray into home building created a demand for a number of new, high-tech home innovations, such as HVAC systems, drywall and asphalt shingles – all of which happened to also be available from the Sears catalog for stand-alone purchase. Just like the Amazon Alexa.

Amazon is not the Sears of the 21st century – not yet anyway. The company captures 44% of online U.S. sales, but only 4% of all retail sales. That doesn’t dissuade criticism of the company as too big. President Trump and Vermont Senator Bernie Sanders have both recently criticized Amazon, with Sanders calling for a Congressional inquiry into its influence and Trump criticizing Amazon’s use of the tax code. (An irony, given the President’s history with the tax code.)

An even greater irony is that Bill Simon, former CEO of Walmart U.S., calls Amazon predatory, complaining that the company is destroying jobs and small retailers. Simon says Congress should split up Amazon, much like the federal government broke up AT&T in 1982.

Sears, once the world’s largest retailer, operated 3,500 U.S. stores as recently as 2005. After filing for bankruptcy on October 15, the number had fallen to 700, with more closings expected this month.

Some may blame Sears’ demise on its CEO, balance sheet or stupid acquisitions. Others will blame competition from Walmart and Amazon. Those influences are simply components of a more primary dynamic: most-to-all retailers, even the most successful ones, eventually go away. The market, not Congress, put limits on Sears’ growth, power and ultimately, its existence. It will eventually do the same for Amazon.