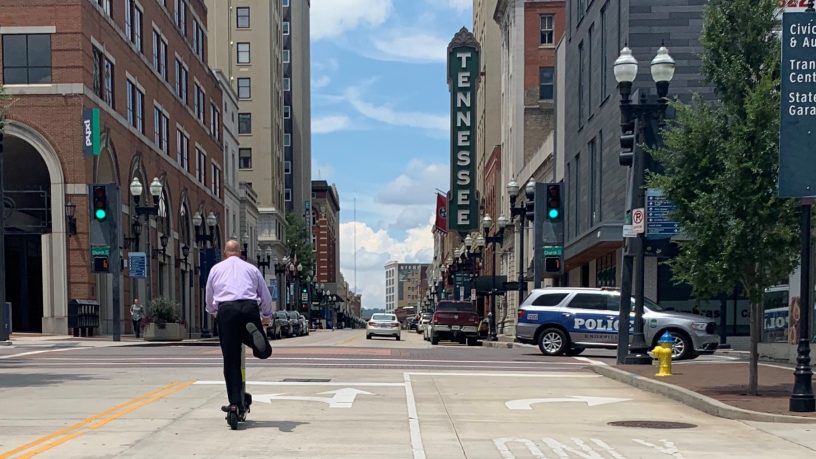 Because of some work being done on my house last week, I moved into the Embassy Suites on Gay Street and became a downtown dweller for 10 days. It was fun and educational, but not the least bit tempting.

For 35 years I’ve had a downtown office. I parked in a garage underneath my building and eat lunch at my desk. I think I work downtown, but it’s really more like working in a studio, with Gay Street as my virtual background. I didn’t fully appreciate the difference until last week.

There is a downtown energy that doesn’t exist in a rural or suburban setting. My temporary hotel home offered the opportunity to meet vacationers at breakfast each morning and flirtily-clad hipsters headed to the cool people rooftop bar each evening.

The only cool people place near my house is the new Dollar General.

I loved my daily walks. I hadn’t realized how many trees we have downtown. They are beautiful. So are the building-side murals around Market Square. In an attempt to feel like a real downtown person, I even took a selfie in an alley. All I need now is an Instagram account and I can be an influencer.

There was a sad irony seeing someone sleeping under a piece of cardboard on the sidewalk in front of the YMCA, only 1,200 yards from the Salvation Army and Knox Area Rescue Ministries.

There was a regular panhandler in front of the Miller’s Building, accosting passers-by with a change bucket and a sign proclaiming “F*** it. Got weed? Pass that s***.” This, only steps away from families at Cruze Farm Dairy.

Did you realize that downtown has 3 ice cream places and 2 chocolate shops within 300 feet of each other?

I love the e-scooters. It takes skill to operate one while eating an ice cream cone.

I want to meet whomever owns the Subway on Market Square. It has outlived a downtown McDonald’s, Wendy’s and two Chick-Fil-A’s.

At 3:00 am there is a small army of city employees who clean downtown. It’s the kind of thankless task that only gets noticed if it’s not done. Thank you.

I created a game on my walks, “Count the KAT Riders.” I highly recommend it.

The concept of “neighborly” is different downtown – something I realized while standing on the sidewalk in my boxer shorts in the middle of the night after an intoxicated cool person at the hotel rooftop bar decided it would be fun to pull the fire alarm. When it happened again two days later, I just stayed in bed. I suspect the folks on the sidewalk appreciated it.