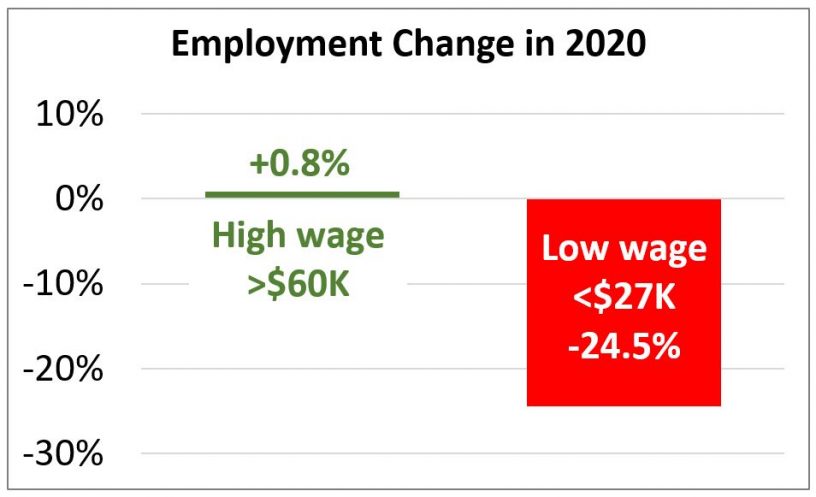 It will take some time to learn whether COVID-19 has permanently changed aspects of our economy, accelerated inevitable changes or some combination of the two. But there is little doubt that haphazard shutdowns and stimulus benefits have revealed huge discrepancies in safety nets, productivity and the permanence of economic gains.

When discussing economic matters, people often unknowingly switch back and forth from macro (the economy as a whole) issues to micro (the economics of the individual.) Federal stimulus checks don’t create economic growth; they merely accelerate future economic activity into the present. But at the individual level, a person without a job doesn’t have the microeconomic luxury to forego “free” money in the interest of future U.S. Gross Domestic Product (GDP) gains.

This “big picture/individual picture” difference was enormous in 2020. You likely know that U.S. GDP experienced its worst quarterly decline in 2020 – a whopping 36 percent drop in 2020’s second quarter. What you probably didn’t know, however, is that aggregate personal income actually increased last year. Although 25 million Americans lost their jobs, total income – including the value of “stimulus checks” and unemployment benefits – increased more than a trillion dollars.

Half of the trillion-dollar increase in personal income was from unemployment benefits. Another $250 billion made it into peoples’ pockets via the $1,200 checks in April.

Wage income (big picture) dropped a modest $43 billion, by itself no cause for alarm. But because the impact of the virus has been outsized in certain areas of the economy (compounded by unevenly instituted shutdowns), a large portion of the job loss has been concentrated in the low-wage service industry. At the micro (individual) level there are millions of individuals who are depending on the federal government for modest income supplements and contractual relief. Up to 20 million renters are behind on rent and face eviction once (if?) the federal moratorium expires. More than 2.2 million homeowners are 90 days or more past due on mortgage payments. Approximately 40 percent of student loan borrowers are behind at least one payment. There are 5.3 million Americans receiving unemployment benefits, three times the number from a year ago.

This, while the Dow Jones Industrial Average is setting at an all-time high. Unemployment among those earning more than $60,000 annually is lower now than a year ago. Total household net worth reached a high in the third quarter of 2020, a record likely broken in the fourth quarter.

If the country were a business, our financial statement would be in pretty good shape – certainly better than our competitors. But the performance of various business segments looks remarkably uneven – with some segments operating well below their proven potential.