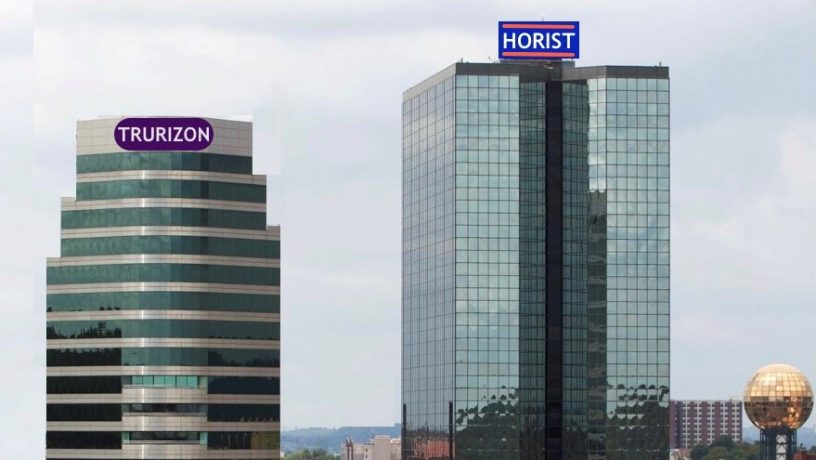 The bank sign wars continue in downtown Knoxville, with Truist (“What do you get when you cross a BB&T with a SunTrust?”) maintaining its tight lead over First (Tennessee) Horizon, but likely not for long.

The 24-story Riverview Tower (the C.H. Butcher building, for Knoxville old-timers) once had BB&T signs near the top of the building on all four sides. The building now features the non-word “Truist” next to a logo that looks like the YouTube video pause button.

Next door at the 27-story Plaza Tower (the Jake Butcher building), First Horizon is replacing its rooftop red, white and blue logo sign with something big. So big that a 300-foot crane sat in the middle of Gay Street for six weeks lifting the necessary steel infrastructure into place.

I’m sure that both signs will serve the corporate ego needs of the executives of each organization, at least until they change names again. (Because of their geographic footprint, a merger of the two banks is unlikely, but it sure would be fun to see how much a consultant would charge to recommend naming the combined bank Trurizon or Horist.)

For years, many banks spent lavishly on offices to project a sense of success and safety. Banks looked at branches the way Subway looks at store locations: more is better. Covid has accelerated changes that were otherwise inevitable, including the demise of bank branches. Like trade groups with their four-times-a-year annual meetings in Las Vegas and Boca Raton, Covid has exposed branches as mostly needless relics of an era when banks gave you a toaster for opening an account. Massive downtown rooftop billboards seen by the same 2,000 people every day also fall into that category.

This is hard for me to acknowledge, as I am a bank branch guy. My office is in one of the two downtown towers; I used to go in the lobby branch at least three times a week to do something – even if only to say hello or to monitor the employee-to-customer ratio at different times of the day. (It was usually about four-to-one.)

I finally realized that the bank branch is headed the way of the bookstore when a 76-year-old client recently told me about opening a deposit account at an online-only bank. His new account pays a significantly higher interest rate than is available at a local walk-in bank. He also says that it is easier to get a person on the phone than when he used to try with his local branch.

But he does have to give up one thing with the online bank: huge rooftop signs. Fortunately, he already has a toaster.