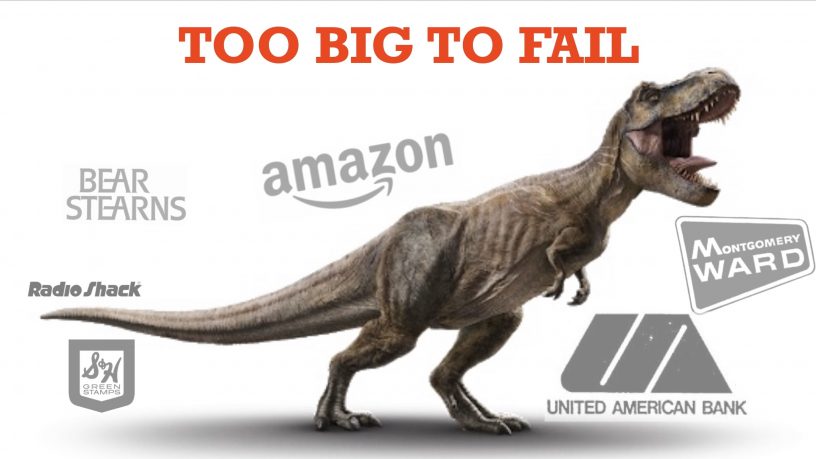 In a November 2018 speech, the CEO of one of America’s largest companies predicted the demise of Amazon. “I predict one day Amazon will fail. Amazon will go bankrupt.” The speaker was not some uneducated simpleton. He is/was the CEO of an international behemoth with 800,000 employees and a market value of more than a trillion dollars.

Who said that Amazon would go bankrupt? Amazon founder and CEO Jeff Bezos.

Critics of big business argue that it is impossible for small companies to compete against behemoths like Walmart and Amazon. In a sense, they are correct. A local general merchandise retailer can’t compete with Walmart on price or with Amazon on convenience. But there are plenty of other ways to compete, including items such as service and product selection. Or, as Dollar General has proven, store location.

Only months after Sam Walton opened his first stores in 1962, a St. Louis newspaper headline questioned, “Can Tiny Wal-Mart Survive Against the Big Guys?” In 1962, K-Mart was an established, profitable and powerful company that need not worry about some little upstart Arkansas-based merchant and trade. At the time, the same could be said about Montgomery Ward, Woolworth’s, Service Merchandise, Waldenbooks, Toys R Us and Radio Shack.

Walmart crushed each of those businesses by focusing on areas where each was vulnerable. In his autobiography, Sam Walton noted that competition against those larger competitors is what made Walmart the success it became.

Critics today decry that when a company can become so large that it no longer has any vulnerabilities and can simply crush its competitors. Of course, the same was once said about Sears.

Natural failure is one of the most beautiful aspects of capitalism.

Capitalism produces bad results when government attempts to manipulate the power of competitive forces. Consider the 2007-09 financial crisis. The cause of the crisis was much more complex than “Wall Street greed almost ruined the U.S. economy.” But for the sake of argument, let’s assume that the entire financial crisis was the result of financial engineering and unfair lending practices. Regardless of the cause, the entire U.S. economy did not fail. The federal government was able to provide massive short-term economic support in 2008, preventing a complete shutdown of the financial markets. In that respect, “the system” worked.

But then the government went a step further, deciding to save certain businesses – not just the economy. The federal government spent $85 billion saving AIG but allowed Lehman Brothers to fail. Bear Stearns failed, while Goldman Sachs received $22 billion in federal bailouts.

For capitalism to work, failure must be an option. Jeff Bezos not only understands that, he is counting on it.