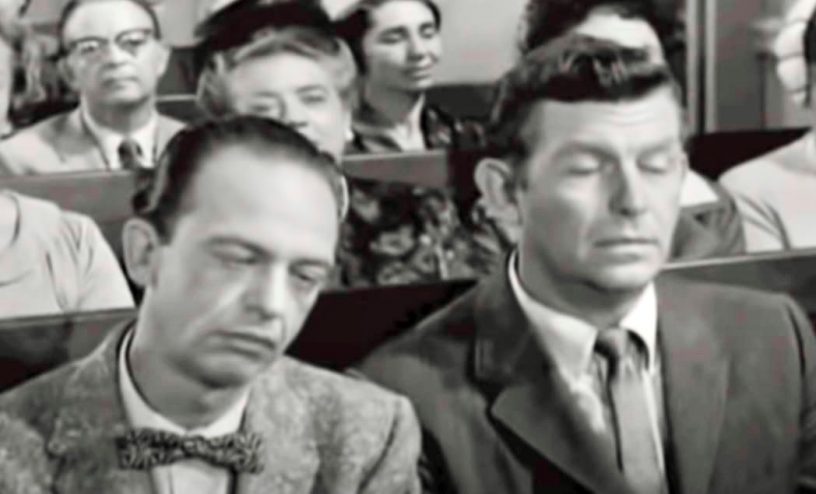 In his first sermon following a 10-day hospital stint for colon surgery, Pope Francis spoke about the importance of rest, warning of the trap of activism and the “danger to be caught up in the frenzy of doing things.” His message seemed familiar. “Let us put a halt to the frantic running around dictated by our agendas. Let us learn how to take a break, to turn off the mobile phone …”

Then I realized where I first heard the sermon: the Andy Griffith Show.

In an episode from 1963, Mayberry’s All Souls Church welcomed a traveling minister from New York to the pulpit. As Barney sat dozing in the pew, the preacher warned against a life of frantic competition, with days scheduled to the second. “In our furious race to reach outer space are we perhaps neglecting our inner space?” He encouraged the townsfolk to rediscover the old fashion ways and simple pleasures, finishing his homily with “Relax; slow down; take it easy. What’s your hurry?”

I’ve seen every episode of Andy Griffith. Nothing in Mayberry was hurried. The fancy New York preacher was simply suffering from the psychology of declinism.

Declinism is the belief that the natural tendency for a system is deterioration. It is the feeling that things used to be better and are likely to get worse. Declinism seems to most often afflict people after losing their natural sense of youthful optimism – maybe after they realize they hate their jobs.

Declinists lament that today’s kids are glued to electronic devices, unlike the good ole days when youngsters played with sticks and ate mud. My childhood preacher warned that adding a fourth television station to our local cable offering would ruin kids. Unlike radio, he explained that television deprived people of creativity.

For thousands of years declinists have claimed that things are worse and becoming more so. And for thousands of years, they have been wrong. Over time the world has continued to improve by almost every objective measure: health, literacy, education and economic well-being.

At some point, we will have even greater inflation, lower stock prices, higher interest rates, less competent elected office holders, more distractions and higher taxes. Those have all happened before and they will happen again.

And maybe someday the sky really will fall, but the general trajectory for a couple hundred thousand years of humanity has been one of improvement. Although there isn’t a single historical era where standards of living were better than they are today, I fully expect that in 60 years some wise and deservedly-respected person will be extolling the virtues of a simpler time, back in 2021.