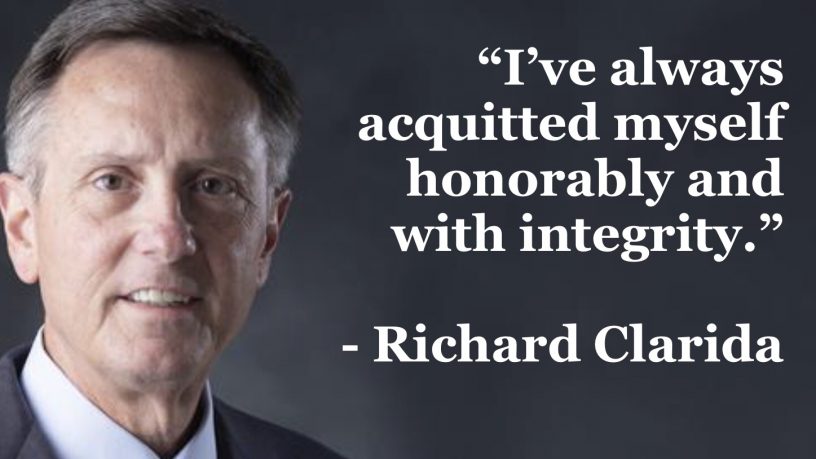 Federal Reserve Board Vice Chairman Richard Clarida resigned this week under pressure for purchasing millions of dollars in stocks the day before the Fed announced emergency measures to support the economy. It is illegal for fund managers to “front run” their clients’ or investors’ trades. Clarida front ran the entire country.

He is also the third Fed official to resign in less than four months following disclosures of trades each made in the early days of the pandemic.

Is it any wonder people don’t trust the Fed?

House Speaker Nancy Pelosi and her husband recently made $30 million trading stock options on tech companies. When criticized about it, Pelosi dismissed calls for trading bans by members of Congress, explaining that lawmakers should abide by all disclosure laws, but should also be able to participate in the free-market economy.

A good start would be for members of Congress to abide by the laws that already exist.

An investigation by Business Insider found that 52 current members of Congress and at least 182 of their staff members filed late or incomplete disclosures related to stock trades made in 2020 and 2021. Congressional ethics staff wouldn’t tell Business Insider if those members even paid the whopping $200 fines for these violations. (House and Senate ethics officials routinely waive the fines.)

Lawmakers have 45 days to report their trades, but not even in detail – only within broad ranges. They hand deliver a paper report to a congressional clerk. To view these public records on a computer, one must go to a specific Capitol Hill basement room and view PDFs on a dedicated congressional computer. Or a person could submit a written request and hope someone responds to it. If they do, you get printed versions of the PDFs, but only after paying 20 cents a page.

That antiquated process simply begs to be violated.

Here is my proposed solution.

No elected official, appointed policymaker, Cabinet member, judge or any staff member of these persons can trade on material, non-public information. We already send corporate executives to jail for doing that; public officials should be held to the same standard.

All public officials (and their staff) would have 36 hours to electronically report the full details of their investment transactions to a database that would be as accessible and user friendly as all the Covid dashboards. First time disclosure violators would be assessed a $10,000 fine that must be paid with personal funds, not campaign cash. The fine for each repeat offense would double. No official would receive a paycheck until their fine was satisfied.

I don’t know if this system would work, but I do know that the current system doesn’t.