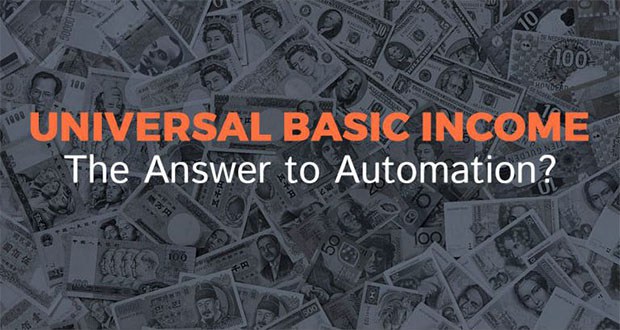 General Motors describes its plan to begin operating a ride-sharing service using fully autonomous vehicles next year as “one of the biggest business opportunities of all time.” If the automobile industry succeeds in this technological employment disruption, it will not only replace up to 15 million motor vehicle operator jobs (Department of Commerce estimate), but will also threaten jobs in automobile manufacturing, insurance, road construction and hospital emergency rooms. It would also put a lot of those parking ticket people out of business, something over which I am likely to lose little sleep.

The threat of these and scores of other jobs vanishing has increased calls for the federal government to provide every adult an unconditional guaranteed basic income. That is, the U.S. Treasury would send a check to everyone each month. Theoretically, this would not only provide a safety net for the unemployed, it would also free people from the burden of holding a job simply to pay their bills, allowing them to pursue entrepreneurial and socially useful activities.

Lawmakers in Hawaii voted last year to explore the idea of a universal basic income. Hawaii has only 2.9% unemployment, but because so many Hawaiians work in low-paid, tourist and agriculture jobs, 17% of its citizens live below the poverty line.

Since 1976, every full-time Alaska resident has received a check from the Alaska Permanent Fund, a $55 billion pool funded by state oil revenues. When polled, Alaskans regularly indicate their preference for the annual check rather than reduced state taxes.

The idea of the U.S. providing a guaranteed basic income predates the signing of the Declaration of Independence, as Founding Father Thomas Paine once envisioned the government providing a monthly stipend to all adults.

Some people believe that a country as wealthy as the U.S. can (or even has a moral obligation to) provide each of its residents a very basic, but unconditionally guaranteed standard of living. Others find the idea laughable.

Of course, only a few years ago the idea of a self-driving car was also laughable.

Thirty years ago, few people would have predicted that the government would soon provide for every resident to have medical insurance. But Republicans have not repealed the Affordable Care Act because more than half the country now supports it, proving the seductive political appeal of elected officials bribing people with their own money.

I recently read an article about a two-year Finnish experiment with a universal basic income and another article titled “The Dawn of American Socialism.” In the same week, I also read that California’s public pensions are in such a threat of insolvency that Governor Jerry Brown says that the state must reduce benefits to both current and future retirees.

It was impossible to miss the irony.